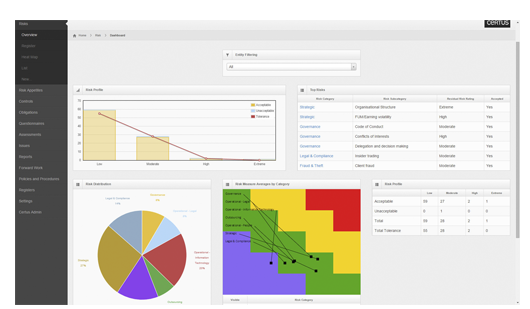 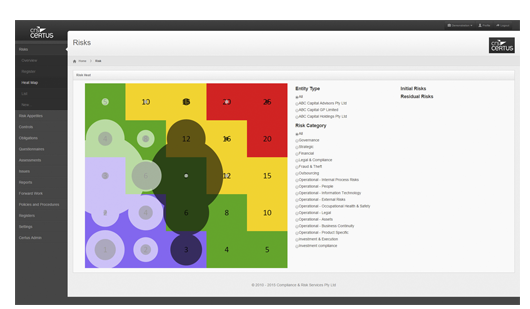 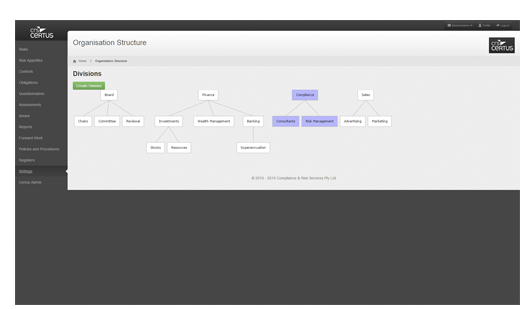 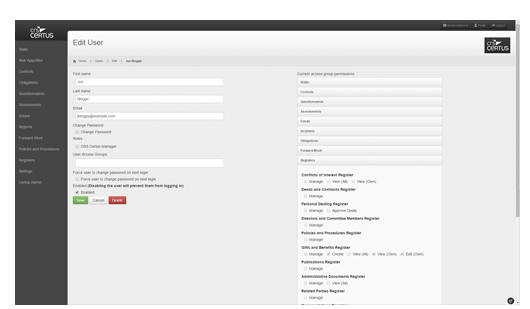 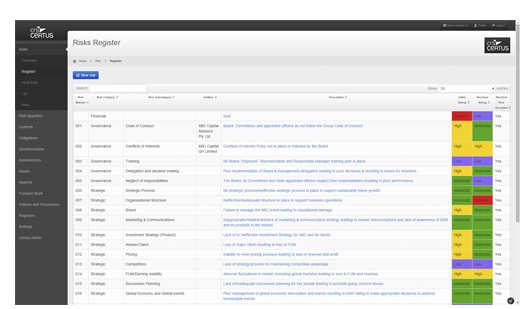 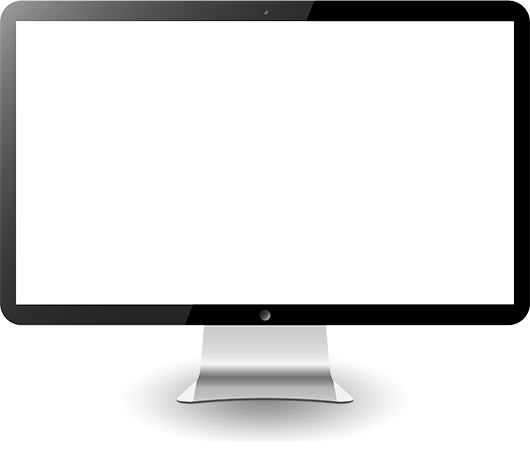 You select the modules you use and customise to your needs. You control your reports' content, you tailor your installation to suit your businesses needs

One stop for all of your risk and compliance office needs. View completed and incomplete controls. Retain all your controls and records in the one accessable data base

CRS Certus becomes your record of your risks, risk profile, risk mitigators, obligations, responsible managers and staff, policies and procedures. It holds your proof of control execution. It facilitates recording and managing issues, incidents and complaints. CRS Certus can be interrogated to deliver reports on all data it holds in a format your audience needs.

Email alerts issued out of the system directed to your defined positions. Customisable email content and triggers. Email service log validates that communications are sent.

Flexible reporting to PDF and XLS(X). Customisable report content, period and presentation, tailored and relevant for the audience. Reports returned immediately. Aides regulatory enquiry, annual audit, demonstrates the control you have over your business

In addition to providing CRS-Certus as a software service, we provide consulting and outsourced management services. These services are available separately from CRS-Certus.

We can help to:

Compliance & Risk Services Pty Ltd has been providing risk and compliance management solutions for businesses for over 10 years.

Our speciality in financial expertise

Our values and ideals

Our programming team is retained in-house. We believe that the partnership of practitioner and programmer provides a strength that few competitors may match.

Secure IT architecture and backups

We have provided services to over 200 clients over the globe. We have acted as topic experts under ASIC enforceable undertakings, engaged as experts in litigation and ASX disciplinary reviews.

On 21 August 2020, ASIC issued a media release against the RI Advice Group Pty Ltd (RI) for alleged failure to meets several of its licensing conditions due to inadequate cyber security systems in place.   At the time RI was 100% owned by the ANZ Banking Group Ltd.

It is interesting that the cyber breaches occurred in several of its authorised representatives.  I have provided considerable background as it provides a context for the outcomes ASIC is seeking.

s912A(1) Corporations Act details the general obligations all Licensees are required to meet. Sub-section (h) requires a licensee to have in place adequate risk management systems.

In summary the detailed allegations are:

In addition to a finding of contraventions of the Corporation Act, ASIC is seeking a pecuniary penalty order being the greater of:

In the statement of claim ASIC identified the following cyber breaches having occurred in its authorised representatives.

On or about 3 January or 3 March 2017 RI became aware of a cyber security breach informed by an adviser as having taken place in late December 2016.

On 30 May 2017, RI became aware of another cybersecurity incident that occurred on that day as a result of being informed by an authorised representative.

On 29 May 2018, RI became aware of cyber security incident on 23 May 2018 that arose as result of Trojan software installed on the laptop of an Authorised Representative.

ASIC is alleging that RI should have but failed to:

incident response controls; and ensure that those controls were remediated across its AR network where necessary in a timely manner, in order to adequately manage risk with respect to cybersecurity and cyber resilience.

ASIC assessment of the cyber security documentation in place

How did RI respond to the cyber security matters

It commissioned experts to provide it with reports.

It received its first report on 7 August 2018.  In that report deficiencies identified included 90% of desktops identified as not having up to date antivirus software, no filtering or quarantining of emails, no offsite backups having been performed and passwords and other security details found in text files on the server desktop.

On 24 October 2018 RI receive an expert report on an assessment of the breach noted in point 3 above authorised representative cyber breach.

What ASIC expected RI should have been done

After the takeover of RI by IOOF 1 October 2018

Following the change of ownership of RI from ANZ to IOOF, RI replaced ANZ-developed documentation relating to cybersecurity with IOOF developed documentation which often pre-dated IOOF’s acquisition of RI.  Like the ANZ documents, the IOOF documents were not tailored to RI and its ARs’ requirements, and RI and its Ars did not implement and operationalise them as part of RI’s own governance and management of cybersecurity resilience and risk management.  RI’s risk management systems and resources with respect to cybersecurity and cyber resilience remained inadequate, including as of 12 March 2019.

The view as to what should have been done post that time is what has been noted above. Additionally, the steps taken by RI in relation to cybersecurity in the period from 1 November 2019 to 1 May 2020 were neither initiated nor completed in a sufficiently timely manner and were not sufficiently broad.  RI’s risk management systems and resources with respect to cybersecurity and cyber resilience remained inadequate, including as at 1 May 2020.

Consider ASIC’s view on cybersecurity requirements by a Licensee.

The court application does not indicate if ASIC became aware of the cybersecurity breaches through self-reporting by RI.

Feel free to drop us a message if you have any questions or requests.

Or give us a call at